I have not tested these linux viewers. If you try running it on your linux system, please drop me an email with your results.

This version of the viewer has the capability to directly download and process raw FID data files from the UWSP data server. Some very brief documentation (and dated) on the data processing capabilities is available here. 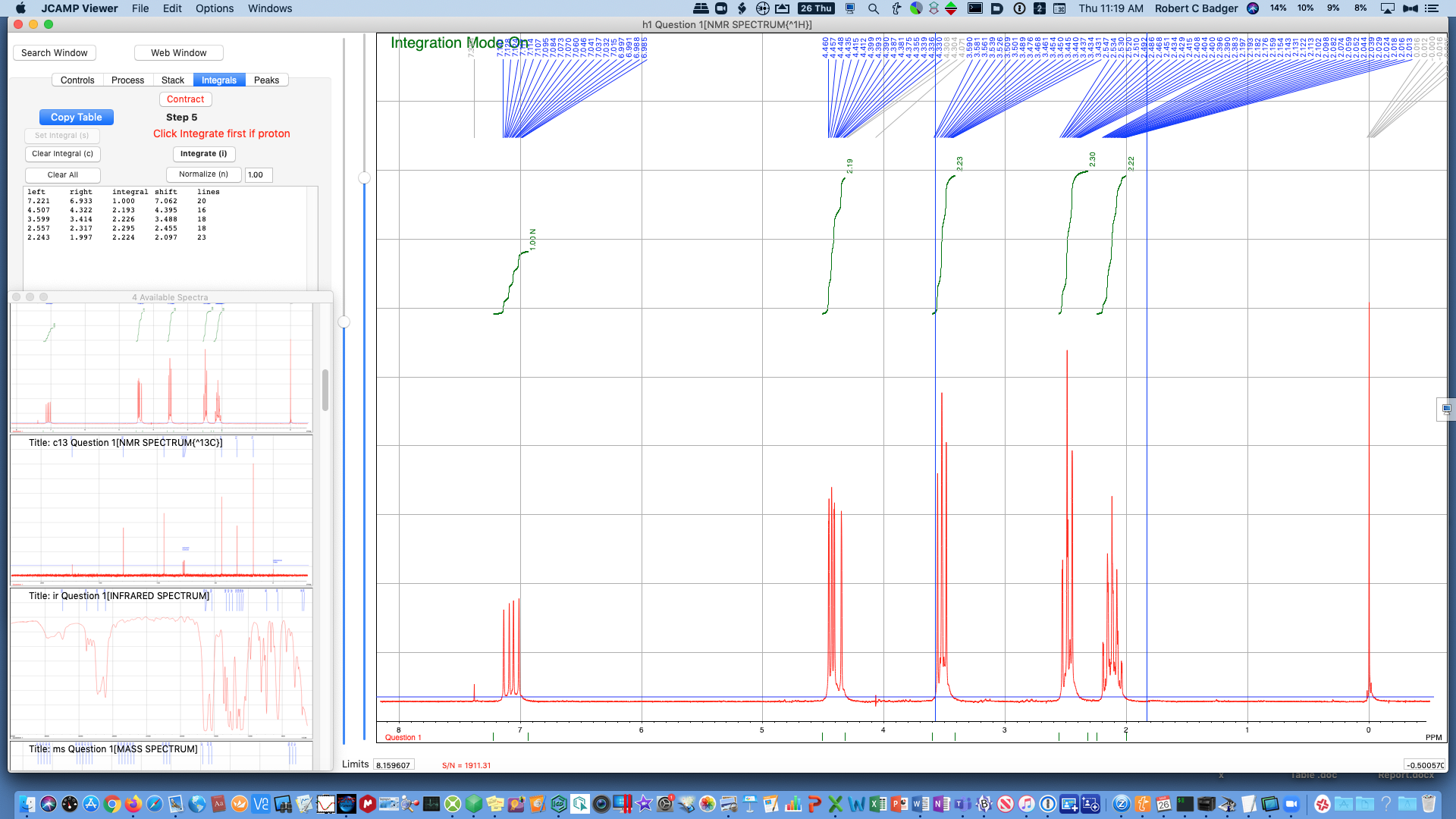 http://www.jcamp-dx.org Click on a thumbnail on the left to switch spectra. Twenty NMR and twenty IR/MS spectra max.

JCAMP-DX spectral files are best displayed using the JCAMP viewer as the Chime plugin(Windows only) seems unable to display spectra with a large number of data points in an AFFN JCAMP data file.

All jcamp files on this site can be viewed as well as those on the NIST web site. In general, all compounds on this site will have infrared, 1H, 13C, and mass spectra. The viewer reads and saves in AFFN format only. It can read compressed JCAMP formats, but writes only AFFN format. See the official JCAMP specification site for details.

All spectra can be expanded in both X and Y coordinates via commands or buttons on the screen. Click and drag will outline a region which can be expanded or displayed via an inset window. Expansion will automatically rescale the Y dimension to bring the largest peak to full scale. Annotations (simple text labels) can be added via the annotation button (toggles on and off). These annotations will be saved if the file is saved via file:save. Right click on a peak will bring up a contextual menu. One of the options is 'Mark peak' which will produce a label showing the X coordinate of the peak. Labeled peaks will also be saved if file:save is executed. Automatic peak picking results in identification of all all peaks above the threshold which can be adjusted via on screen controls. A peak table can also be displayed.

In general, anything displayed on screen can be printed or copied to the clipboard. If Quicktime is installed, the screen display can be saved in jpeg format suitable for direct display on web pages. All jpeg files on our web site were created using this feature of the viewer. Other picture formats may be available as well depending on your system configuration.

Infrared spectra in the database were recorded and converted using a Nicolet FT-IR spectrometer. The default display format is % transmittance versus wavenumber (cm-1), but absorbance is also available. This default can be changed via the preferences dialog and may be overridden by preferences within the JCAMP file itself.

Mass spectra in the database were recorded on a Hewlett-Packard GC/MS and converted to peak table format using software delveloped locally. Normal expansion and labeling is available.

Proton nmr spectra can be displayed in both Hz or ppm assuming the spectrometer observe frequency is available in the file header. The default can be changed via the preferences dialog. In addition, automatic integration can be performed. Raw FID data is available for some compunds in both JCAMP ntuples and MacNMR format. The viewer can read and display the real or imaginary portion of the JCAMP FID. We currently use the Bruker JDX export feature of Topspin 3.6 (400 MHz) to make files available for courses and research at UWSP.

Carbon nmr spectra can be displayed in both Hz and ppm assuming the spectrometer observe frequency is available in the file header. The default can be changed via the preferences dialog. Raw FID data is available for some compunds in both JCAMP ntuples and MacNMR format. The viewer can read and display the real or imaginary portion of the JCAMP FID.We currently use the Bruker JDX export feature of Topspin 3.6 (100 MHz)to make files available for courses and research at UWSP.